This post contains affiliate links. That means if you buy something I get a small commission at no extra cost to you. 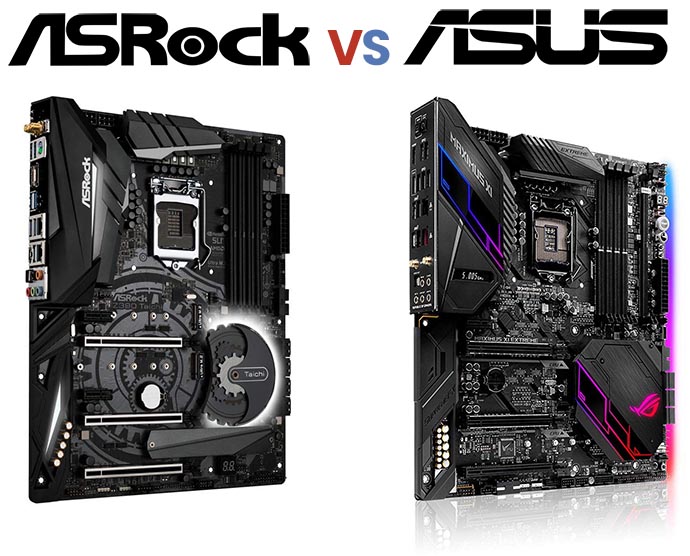 ASRock or ASUS can both be great choices, but for different reasons.

Read on and we’ll figure out which brand is a better pick for you.

First and foremost, you should be looking for a reliable motherboard.

Faulty motherboards cause some of the most difficult to troubleshoot problems – random reboots, shutdowns, and lockups.

A stable system is important whether used for productivity, entertainment, gaming, or as a server.

A good board will have use reliable chipsets and ports throughout, and utilize high quality capacitors and other components.

ASUS has a long history of quality. I’ve not known any of their recent boards to suffer from stability problems. I’ve seen plenty of their products in use for 10+ years with no issues.

ASRock is a newer brand, but they’ve both grown and improved over the last several years. Most would consider their quality to be on the same level as ASUS, and failure rates back that up.

I did run into stability problems with an ASRock AB350M PRO4, which a number of other owners also experienced. The problem seems to have been limited to that one model. I mention it because again, I’ve not seen any recent ASUS model be affected by stability issues.

Outside of one ASRock model I mentioned, I feel both brands make great, long-lasting products.

At the low end, ASRock boards are priced around 10% less than comparable ASUS models.

At the high end, ASRock’s best motherboards are usually found below $300, while ASUS can reach $400 or more.

ASRock is the clear winner in value.

If you have a strict budget, you’ll be able to get more features for your money by going with ASRock.

The differences in options and ports can be overwhelming between boards.

That makes it tougher to nail down the exact board you want. On the plus side, it keeps the price down – you can choose to spend on only the features you really need.

ASUS has a much wider selection of products.

If you’re looking for a certain number of USB ports, particular LAN chip, fan controls, or lighting, those features may be easier to find in an ASUS board.

A great BIOS will have the following:

ASRock and ASUS both make an excellent BIOS. In fact, I’d say they’re the two best out there.

Both offer an “EZ Mode” for general use. An “Advanced Mode” opens up all the device and overclocking settings you could need.

Is there anything that stands out between the two? Perhaps the ASUS BIOS looks a bit nicer. The only other thing that comes to mind is the Ultra Fast Boot Mode of ASRock.

Most brands including ASUS have a Fast Boot Mode, but ASRock’s Ultra Fast mode truly is quicker. Your operating system (Windows 8/10 or Linux) must be in installed in UEFI mode, and the default UEFI BIOS mode must be enabled rather than Legacy. Once enabled, ASRock has the fastest boot time of any motherboard I’ve seen.

The excellent Realtek AC1220 chipset is found on most mid to high-range boards from both brands.

Serious audiophiles will probably still opt for an external DAC + amplifier, but to most ears this chipset will impress.

Going with a lower-end board will get you an chipset like the Realtek ALC892 or ALC887. While these are adequate, if you listen to a lot of music, movies, or games, it’s probably worthwhile to step up to a midrange motherboard to get the AC1220 chipset.

With both brands, you’ll see Intel chipsets used for both wired LAN and 802.11 ac wireless on much of their lineup. That’s a good thing.

The exception is the LAN chips in the lower-end boards from both brands – these use Realtek. While fine for most users, if you are running a server or are gaming competitively it may be worthwhile to choose a model with an Intel chip.

Six SATA ports is standard for most brands, ASUS included. ASRock is a good choice if you need even more, as many of their models have eight SATA ports.

For M.2 sockets, ASRock’s Z390 Taichi series of mobo offers a total of three rather than the typical two sockets you’ll find on all other boards.

USB ports vary greatly by model. If you’re looking for a certain number or type (3.0/3.1/Type C) I recommend checking the specs of each board you’ve narrowed down to.

ASUS’s Aura lighting system is perhaps the most complete RGB system out there.

Product compatibility is best with Aura as well.

If RGB lighting is very important to you, ASUS is the way to go.

Achieving an overclock can be as simple as a couple of clicks in the BIOS. Or, it can be an entire hobby on its own.

The majority of overclockers are looking to squeeze more performance out of their CPU, GPU, and RAM without spending a ton of extra money.

Most mid-range motherboards can accomplish this; some better than others.

Extreme overclockers will likely compare components like chokes, MOSFETs, capacitors, and heatsinks between models. That’s more advanced than what I’ll get into here.

Most ASRock boards priced above $100 or so will overclock well enough to satisfy most people.

ASUS, meanwhile, is perhaps the best brand out there for overclocking – in particular their ROG series.

The settings available are more intuitive; ASUS even includes an overclocking guide in the BIOS menu.

From numerous reviews I’ve read, ASUS frequently performs at or near the top in terms of overclocking performance.

I’d look to ASUS if you see yourself maximizing your overclocks and want the best BIOS to do so.

All recently produced mainboards from these two brands have 3-year warranties.

In my experience, ASRock is quick and straightforward to deal with during the RMA process.

ASUS RMA’s typically took a little longer for me. While I’ve had generally good experiences, I’ve heard of some mixed results with motherboard RMA’s. Boards are more easily damaged from mishandling by the user than a lot of other components. ASUS seems to be more particular about physical damage. If you RMA with ASUS, be sure to take good photos beforehand and use plenty of packing material.

Side by Side Comparisons

Dozens of motherboards are available with each chipset. Here I’ll focus on the Z390 chipset from Intel and the B450 and X470 from AMD. This should at least give you an idea of how offerings from ASRock and ASUS compare.

These boards are what I’d consider “upper-end” – they aren’t quite the top of the line, but they have everything that 90% of PC enthusiasts need.

Let’s start off with what is the same:

There are a number of differences between the two.

The Extreme4 has an M.2 (Key E) for slot for adding an optional WiFi module instead of using PCIe or USB. This is in addition to the two standard M.2 slots both boards have.

The Extreme4 can run triple video cards at full x8 speed while three are limited to x8/x4/x4 on the Prime Z390-A.

Power consumption is a bit lower on the Prime at both idle and load.

The Extreme4 has a bit more in the way of features, though these two boards are very similar.

Both boards are priced well at under $200 for being so feature-packed.

These are high-end, full featured boards that still won’t break the bank.

First, most people should skip the Taichi Ultimate.

Though the name sounds impressive, the only thing the Ultimate offers over the Taichi is 10G ethernet, which requires special hardware to take advantage of. Best to save the money if you won’t use it.

Back to the Taichi versus the Maximus XI Hero. Here’s what they have in common:

The Taichi has several advantages over the Hero:

The Taichi has some nice additional features above the Hero as shown above. Getting dual LAN with ASUS would mean spending even more.

As it stands, the Taichi can be bought for anywhere from $80-110 less than the Hero. The savings are so significant that as good as the Hero is, it’s tough to recommend over the Taichi.

Sometimes you need an affordable board but still want a great chipset for performance and reliability. B450M boards are a great choice in the AMD realm.

Since these are micro ATX motherboards (the “M” in the name is for Micro), they’ll fit micro ATX cases.

The B450M PRO4 and B450M-A/CSM both have Realtek audio and LAN, and four SATA ports.

The PRO4 adds a second M.2 socket, though it is limited to SATA3 speeds. There are a couple more USB ports at the rear as well.

While detailed benchmarks are not available on the ASUS board, I expect the two to perform very similarly.

Pricing is nearly identical on these motherboards, with typical sale prices at or just below $80.

Comparing the Taichi vs Taichi Ultimate, the only difference is a 10Gb ethernet port and higher price on the Ultimate.

Since most won’t make use of 10GbE, I’ll compare the standard Taichi here.

Here’s what features the Taichi and the Hero share:

Connectivity is where the X470 Taichi sets itself apart.

The Taichi includes 802.11ac WiFi plus Bluetooth onboard. ASUS makes you pay about $20 extra for a WiFi + bluetooth version.

ASUS goes nuts on USB ports with their board. Compared to the Taichi’s eight, the Hero has a dozen rear USB ports.

ASRock once again shows their aggressive pricing strategy, with the Taichi selling for about $50 less.

Deciding on a motherboard can be a tough call with so many options out there.

You really can’t go wrong with most of what ASRock and ASUS have to offer.

That said, ASRock has really made a push to offer more for your money. If you’re looking for the most features for your dollar, ASRock comes up on top for value.

There are still reasons to choose ASUS over ASRock. Between most comparable models, ASUS is better for overclocking. ASUS has also been producing motherboards longer. This has led to more a more reliable BIOS, software, and drivers, in my experience.